Welcome to my stop on the D S Kane Blood Ridge Book Blast
Sit back and enjoy my interview with an author who knows first hand about espionage and intrigue. 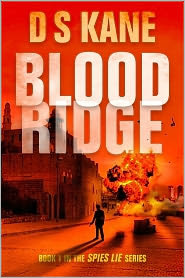 The night Jon Sommers finds out his fiancé Lisa Gabriel has died in a terrorist bomb attack, he is visited by spymaster, Yigdal Ben-Levy, who tells him that Lisa was not a fellow graduate student but a Mossad spy sent to bring him to Israel. Ben-Levy also tells him that the death of his parents was no accident and persuades Sommers to join Mossad to seek justice for Lisa's killer. But things get more complicated, and Jon finds himself at the center of a dangerous global conspiracy.

DS Hi! Welcome to The Reading Frenzy. You’re my first ex-spy!
Tell my readers and me about Bloodridge.
Bloodridge is about a young orphaned Brit who discovers that his entire life was fabricated for him by an intelligence service. When Jon Sommers finds out his fiancé Lisa Gabriel died in a terrorist bomb attack, he is visited by spymaster, Yigdal Ben-Levy, who throws Jon’s life into chaos, when he tells him that Lisa was not a fellow graduate student but a Mossad spy sent to bring him to Israel. Ben-Levy convinces Jon to seek justice for Lisa’s murder by joining Mossad as a kidon (assassin) and going after Tariq Houmaz, her alleged killer. But things are more complicated than he was told, and soon he finds himself in the middle of a global conspiracy.

How many novels will the series include?
At least six. So far, four are for sale. The fifth Baksheesh, is now being polished, and I’m writing the sixth, ProxyWar.

They say write what you know and who better than you to know espionage and intrique.
Was Blood Ridge based on any certain event?
Not a single event, no. Bloodridge came about from my watching the evening news and noticing how some current events seemed to have underpinnings similar to events I was involved in.  Truth, or at least half-lies, make the best fiction in the spy world.

Many times in novels spies are adrenalin junkies. Some become addicted to the rush. Most dread it, I believe.
Is this true of you too?
No. Becoming adrenalized is like taking any other drug, and it doesn’t take much to find the probability of death quite alarming. In my case, I tried to avoid danger as much as possible. When it’s unavoidable, flight is your best alternative. If all else fails, then fight and suffer the rush.
How do you satisfy that danger urge? I don’t relish danger. There is an urge to be anywhere else besides a place where I might die. And so, my characters behave as I would. They all end up fighting battles, and sometimes despite having a choice, but my characters never fight if it isn’t to keep themselves and their nations from certain disaster.

Was there something in particular that led to your becoming an author?
Or was it something you simply chose for your “retirement”.
I’ve been writing since I found my grandfather’s Remington and some blank sheets of paper, when I was eight years old. I was a management consultant for over twenty years, writing reports for clients. I was published and quoted in the financial trade press and financial textbooks over ten times. As an operative, the part of my job I enjoyed most was writing reports, which rarely reflected what I’d done with any accuracy. After all, spies lie. My original intent I writing Bloodridge was to convey my feelings about how every country’s intelligence services are designed to control the country’s political destiny.  Fiction turned out to be the best route.

Thanks DS for taking the time to answer these questions.
Are appearances listed on your website or would you have to kill us before you revealed your real identity?
My real identity? Not a very well know secret, but I’d prefer if you just call me “Dave.”
My appearances are listed on the website, but the blog pages of the website (http://dskanethriller.blogspot.com/) are the best place to find out where I’ll be appearing. 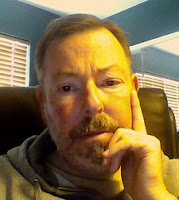 Meet the Author
D. S. Kane worked as a covert operative for over a decade, travelling globally. Now, he’s a former spy, still writing fiction that exposes the way intelligence agencies craft lies to sway and manipulate their national policy, driving countries into dangerous conflicts. Kane can be found at , @DSKaneThriller, anwww.facebook..com/DSKaneAFormerSpyStillTellingLies. 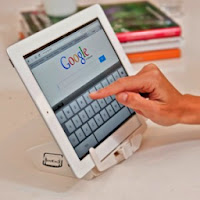 Today's Gonereading item is:
BookBax Pro-book and e-readerholder. What better way to read yourfavorite holiday book or recipe while you'remaking the Thanksgiving or Christmas Turkey$14.99 Click HERE for the buy page